Executive function is a fancy scientific word for willpower or discipline. It’s how social scientists study our ability to control our impulses and the latest research has pretty much debunked conventional wisdom on the subject.

We have all heard about the famous marshmallow test where kids who displayed discipline at not grabbing a marshmallow right away were shown to be much more successful later on life seemingly proving that notion that self-control led to success. The truth is actually much more nuanced. What the test really showed was that rich kids who had no scarcity worries in their lives were much more likely to wait than poor kids, in essence proving nothing more than the fact that socioeconomic standing rather than character correlated with financial success later in life.

Still, the test provided a clue to what really matters which is context. A poor kid coming from a context of scarcity where the future is uncertain would very logically have a much stronger predilection towards present value while a rich kid for whom the present was much more stable could take a bigger risk on the future. (This little dynamic by the way explains why poor people spend their disposable income on the lottery while rich people buy bonds)

Yet within this idea of context, there were a few new discoveries that social science made. For example when scientists re-ran the marshmallow test with children controlling for socioeconomic background but this time told one set of kids that they were on the “green team” and that members of the green team waited for the marshmallow the executive function of those kids was much stronger and their wait times much longer even though they never met any members of their team. The mere concept of peer pressure was good enough to improve behavior.

Group support is one of the easiest and most effective ways to improve executive function whether it be exercising through a tennis league, joining a walking club, attending a Weight Watchers meetings or in our case trading together in a chat room where we can discuss markets and ideas in a social setting.

The net takeaway from the latest research is that discipline does not work. In fact, it is extraordinarily counterproductive as the mental energy expended on telling yourself to NOT do something actually weakens your resistance to the very thing you want to avoid.

According to scientists the better tactic is to create a plan that simply never exposes you to temptation while at the same time makes proper behavior as pleasant as possible.

I’ve actually managed to do all that with my own day trading recently without even realizing that I was using the latest cutting edge science techniques. I love to day-trade but my two biggest weaknesses have always been to make random trades out of boredom and fade the trend in an often futile attempt to find a bottom or a top.

A few weeks ago, however, as I was preparing for the Chicago Traders show I was going back through BK library of strategies and stumbled across #bkflow a strategy we used to trade in the heyday of FX volatility but abandoned a few years back. I took a look at it with a set of fresh eyes and realized that this could be a very good setup if it had a trend overlay filter. Then I got in touch with my programmer and coded the logic.

Now I have an algo that spits out 8-10 trade ideas for me per day. Ideas that are naturally on the side of the trend. The net result has been nothing short of astounding. I stopped making random trades out of sheer boredom because now I had legitimate setups to follow. I stopped trying to pick bottoms or tops as well.

Don’t get me wrong, I still use discretion on the selection and on exit – but that is very much playing to my strength as I apply my analysis of newsflow and priceflow within the very clearly defined rules of the #bkflow setup. Here is how I traded it for the past two weeks – and the best part is that it was totally stress-free. 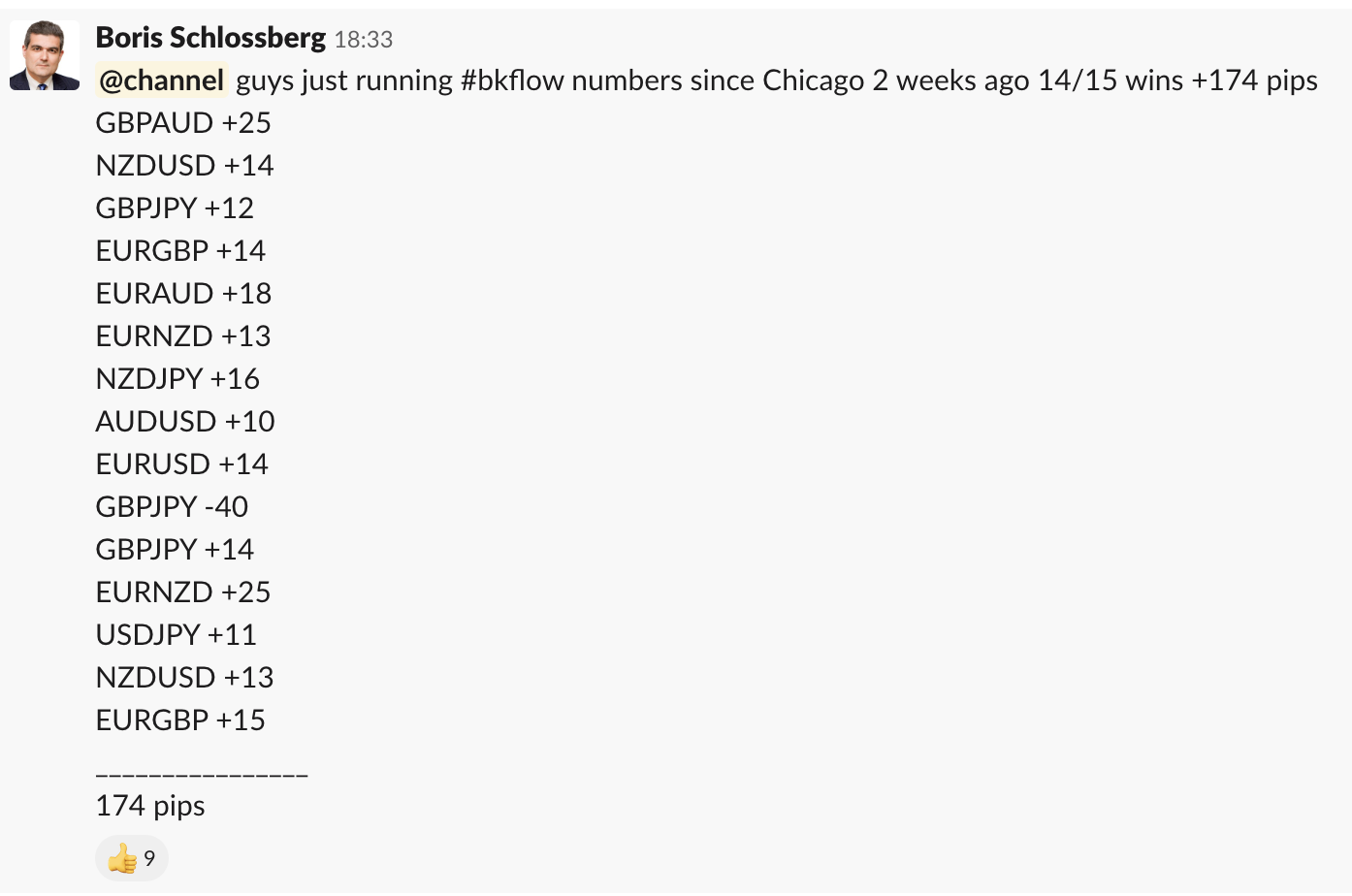 Executive function had very little to do with my trading success – and that exactly how it should be which is why if you want to succeed in trading focus on making it easy and pleasant and ignore the discipline scolds.